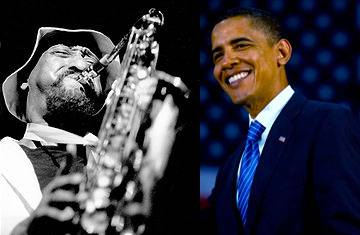 This is my tribute to the Inauguration of President Barack Obama. I have edited excerpts of Obama's historic inaugural speech with Sonny Rollins' landmark recording "Freedom Suite". Recorded in 1958 this was Rollins' musical protest of the state of race relations during the height of our segregation era. It also represents a new freedom in jazz composition and improvisation. Saxophone Collosus' sailing Tenor playing, Oscar Pettiford's solid bass statements, and Max Roach's inventive drum stylings, combine to musically express the struggles of those times.

Fifty years later, we have elected an African American to the highest office in the land, in what is possibly the beginning of the final chapter in the history of the civil rights movement in America. I have juxtaposed Rollins' expression of anger and despair of racial inequality in 1958, with Obama's message of hope and unity as a tribute to the truly historic election and inauguration of our new President.
Listen or download this musical Inauguration Day tribute by clicking the link below:
The Obama Freedom Suite
¶ 9:05 PM 0 Comments Links to this post
Thursday, January 08, 2009
The "Nu" future of marketing Jazz music This new record "label" is a reflection of this digital age, a response to the state of the music industry, and the way music will be distributed in the future. From the Nu Jazz Entertainment website...

All releases will be distributed solely via digital downloads, with no products sold through the traditional music retail outlets. This will allow for the music to go directly into the hands of the consumers in an almost instantaneous method...The future of Jazz is here - Nu Jazz Records is a record label for a "Nu era". Unencumbered by the political constraints of the traditional record companies Nu Jazz Records is able to put the emphasis where it belongs - on the music. ...Unencumbered by the need to do media advertising buys, retail store marketing programs, or to generally pursue the other marketing activities; Nu Jazz invests the money for these expenditures in the two areas where it is most important: 1) By providing royalties to the artist in fiscal percentages which standard record companies would refuse to; and 2) By investing in the development and acquisition of new works of music...From time immemorial the musicians who have labored long and hard to develop their own musical voice have been bitterly neglected and mis-used by the conventional modern day slavery of the recording business.

It has grown apparent that the major record labels have abandoned any new jazz music and completely de-valued this incredible American art form. Nu Jazz Entertainment is attempting to fairly compensate these important Artists, and to market jazz music using new media and technology in this new world order. While I regret seeing the demise of 'physical' media, particularly the art of record covers and liner notes that was such an integral part of the record album experience, I do embrace the immediacy and convenience of digital music. The ability to take my entire music collection in my pocket is a powerful thing and has transformed the music industry in a very positive way. Despite the loss of CD revenues and the ranting of the RIAA, I think that the digital music revolution has brought music back to forefront of peoples consciousness. (I do wonder if it makes us all vulnerable to losing our entire collection from a crashed hard drive or lost iPod... back up your music, folks)

As to the music, I am particularly aware of tenor sax player, Jimmy Greene because he is a product of the local Jazz scene in my hometown of Hartford Connecticut, as is bassist Luques Curtis. Though they have moved on to successful jazz careers, and have collaborated with many great jazz artists in New York city, they often come back to town to play in local venues. I was able to see from this video clip below that this album was recorded at New Haven's (CT) Firehouse 12. This is a recording studio by day, and on several Friday evenings throughout the year, they set up 50 or 60 folding chairs and it becomes a great venue for live jazz performances. The album is entitled The Overcomer's Suite, from Jimmy Greene, and is available from eMusic for a pittance, or wherever digital downloads are sold (and dig the sweet drumming in this clip by Kendrick Scott).

¶ 12:56 PM 0 Comments Links to this post
Thoughts that flow through an ethernet cable connecting my brain to the World Wide Web.


My other webpages & social networks