Ken's Brain Drain
Wednesday, August 30, 2006
Dylan, the legend Bob Dylan, a legend of Folk and Rock, a pioneer of the protest song, poet extraordinaire, founder of folk-rock music, truly a legend like Hendrix, Miles, Trane, Bach and Beethoven. So, even though I haven't liked anything the man has written or sung since 1975, I had to see him live in concert when my buddy Gordon offered up the tix. Man, it was a great concert and great party. Yeah, his 65 year old voice is old and raspy, but it's Bob Dylan not Andrea Bocelli! His band was tight and smokin' and Dylan played lots of old tunes. Standing out in the rain, hearing Dylan sing 'Like a Rolling Stone' sent chills down my spine. A great night.


In The Groove Podcast on iTunes

Finally, after several attempts, In The Groove, Jazz and Beyond has been listed in iTunes. The holy grail of podcasting directories... achieving podcast nirvana! Imagine, In the Groove is now distributed right along side NPR, CNN, KCRW and many other media sources. As you see I am pretty excited. Check it out AND SUBSCRIBE! 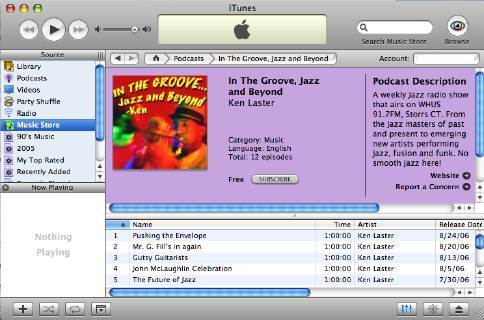 ¶ 12:16 PM 0 Comments Links to this post
Wednesday, August 23, 2006
Brand spankin' new Domain <start geek alert> What is more fun than buying a new Domain on the World Wide Web? Woohoo!! Just claimed jazzandbeyond.com for use with my way cool podcast. jazzandbeyond.com is so much more hipper than refering to it as a 'lasternet dot com slash in the groove'. </end geek alert>  ¶ 8:40 PM 0 Comments Links to this post
Monday, August 21, 2006
The Mid-East today The situation looks even bleaker than before this war began. On August 6, I wrote in this blog:

Any further incursion into Lebanon, such as attacks on Beirut, or other densely populated areas, will not help the Israeli cause, but will only embolden its enemies (which includes Syria and Iran). Continued bombing by Israel, only intensifies that support, and encourages legions of misguided youth to join in Hezbollah's terrorist cause. The reality is that continued violence will only make it more difficult to disarm the terrorists.

It is sad to say, but my prediction was right on the mark. Now, not only does Hezbollah hold a heroic status throughout the Arab community, but has also gained political strength to the point where heads of state are lining up to sing their praises and extol their 'victory'. Prior to Israel's miscalculation, many of those same Arab aristocracy may have been willing to even help disarm Hezbollah. Now any hope that that will happen is remote indeed.

Meanwhile, the situation in Lebabnon, Iran, even Afghanistan are far scarier than Iraq. Even today, Iran put on display a defiant show of its military might, and proclaimed it will not give up its nuclear program. Still, we are wasting all our military capital in this senseless war. Yet, Bush refuses to concede to this unjustified and mistaken foreign policy. Question is, where does it all end.  ¶ 7:37 PM 0 Comments Links to this post
Monday, August 14, 2006
Vacation I just can't take enough vacation time, but this one at Cape Cod was just great. Pics came out great. An incredible whale watch, and ending the week at Fenway Park was perfect.  ¶ 7:34 PM 0 Comments Links to this post
Tuesday, August 08, 2006
The People Speak, The Country Listens Ned Lamont has defeated Senator Lieberman in the Democratic Primary for the Senate. For the first time in many years, I feel good about the Democratic Party. At least in Connecticut, grassroots Democrats have stood up against the party hierarchy to proclaim that they will not support this unjust, illegal senseless war in Iraq. This race has, incredibly gotten national attention. The majority of Americans no longer support this war, and its time for our legislators to take notice. These results speak volumes. Lieberman has backed this administration for this war despite the lies and deception that was used to justify this illegal action. It has cost this country thousands of deaths, and 10's of thousands of lives lost in Iraq. Lieberman has also supported bogus Republican policies like the energy bill giving millions of dollars in tax breaks to the energy companies. No surprise as Joe Lieberman has collected more corporate contributions than any other Senator or Congressman.

Ned Lamont stands for an end to the illegal war in Iraq, he is for universal health care, and an energy policy that does not give more money to oil companies already lining their pockets with unprecedented profits. I can only hope that Ned Lamont represents a new beginning for the Democratic party, one not afraid to stand up to George W. Bush. How refreshing is that!

And guess what! Republicans are already courting Joe Blow Lieberman, pledging support and money if he will run as an Independent. You lie down with dogs, you get up with fleas. Good riddance Joe.  ¶ 10:04 PM 0 Comments Links to this post
Sunday, August 06, 2006
Now is the time... to let the seeds of peace in the Middle East take root. It is not often that I find this administration 'getting it right', but listening to Condeleeza Rice express US policy regarding the Israel/Lebanon conflict, I am heartened to see us pursue an aggressive and balanced approach towards a cease fire. Thus far we have held fast to the primary objectives in agreeing to a cease fire. First and foremost, Hezbollah, clearly a terrorist organization, must be disarmed before a cease fire can be agreed to.

It is now up to Israel to make a move to halt the escalation of violence and killing. Why must Israel make such a move? Because Israel, as the western style democracy represents what is good and just. Israel says they do not wish harm to come to civilians. Israel holds the overwhelming military might to cause death and destruction, and with such power to destroy, comes the responsibility not to use it.

A severe blow has been given to Hezbollah, and a lesson has been taught to the Lebanese government. Israel has accomplished all they can by military means. Any further incursion into Lebanon, such as attacks on Beirut, or other densely populated areas, will not help the Israeli cause, but will only embolden its enemies (which includes Syria and Iran). Continued bombing by Israel, only intensifies that support, and encourages legions of misguided youth to join in Hezbollah's terrorist cause. The reality is that continued violence will only make it more difficult to disarm the terrorists.

Yes, the world owes Israel a debt of gratitude for killing Hezbollah terrorists and destroying their weapons. They have done what the US and other peace loving countries have been unable or unwilling to accomplish. This is why I say that it is in Israel's best interest at this juncture to begin to de-escalate its attacks in Lebanon, and use this draft resolution as a stepping stone to a cease fire and some measure of security for Israel.  ¶ 9:05 PM 0 Comments Links to this post
Thoughts that flow through an ethernet cable connecting my brain to the World Wide Web.