Ken's Brain Drain
Sunday, August 24, 2008
It ain't always jazz It was a blast to help out hosting a live broadcast of Desiree Bassett playing on the Fiat Flux, a Saturday morning show on WHUS. While engineering on the mixing board for part of the show, I also shot the little video clip below. This 15 year old girl is a killer rock guitarist, with a real appreciation for the best of the Classic Rockers (Hendrix, Dicky Betts, Satriani). She has good folks and a great teacher, and has surrounded herself with some of the best local area musicians as seen here with David Stoltz (b), and Rob Gottfried (d).

I also worked on my YouTube Channel. Check out my videos and favorites here.
¶ 2:49 PM 0 Comments Links to this post
Wednesday, August 13, 2008
Newport Jazz Festival 2008 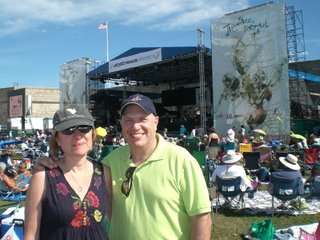 Just returned from a few days in Newport. The vacation was highlighted by the JVC Newport Jazz Festival, my first time at the renowned jazz event. I was most struck by the wide breadth of musical styles that jazz has transitioned to. The traditional quartet or quintet setting, playing bebop based compositions was present but very much in the minority. The music that was predominant was heavily influenced by African, Caribbean and Latin rhythms (as in Lionel Loueke, Esperanza Spalding, Sonny Rollins) or progressive hard rock electronics (Herbie Hancock, Chris Potter, Marco Benevento).  Yet it was all progressive, often hard driving and swinging jazz. As long as these artists are not selling themselves out for commercial popular appeal, the variety it brings to jazz music is very refreshing. At least the Sunday line-up that we attended did not have that smooth-jazz influence that has been pervading the genre as of late. Even Herbie's popular selections from River and Possibilities CD's were played in a creative and thoughtful way that you would expect from this master.
The one quintet that was rooted in the post-modern bop setting was an incredible young group of British musicians, Empirical. They are a quintet of excellent jazz cats that stretched the hard-bop form with complex compositions and free-form solos that could go into space and take it right back home with a funky or swinging beat. Empirical is definitely a group to watch on the jazz scene.
Chris Potter was all over the place playing in about 6 or 7 different combos between Saturday and Sunday. We watched an incredible performance with his own band Underground. His sax playing is heavily influenced by Trane and Brecker, yet in an electric setting with Rhodes piano, a screaming electric guitar, and heavy rock and funk based rhythms (Nate Smith, incredible on drums). This was progressive jazz, not fusion. It was fresh and unique and really, really cooked.
Herbie played a wide range of styles from his classic compositions of the 60's, Headhunters fusion of the 70's, and his incredible arrangements of popular tunes and Joni Mitchell songs from his grammy winning albums. He played with an incredible lineup of Chris Potter (sax), Dave Holland (bass), Lionel Loueke (guitar), Vinny Colaiuta (drums). One of the highlights of his set was during the playing of River. Herbie played a solo that was so beautiful, quiet and compelling, that even in this outdoor setting with thousands present and all the distractions of boats and vendors, the crowd drew absolutely silent, hanging on every gorgeous note that Herbie was playing on the piano. It was breathtaking.
Sonny Rollins closed out the festival late Sunday afternoon. Sonny is a legend and it was a thrill to see him. At 78 years old, this cat can still play with the best of them. Sonny's group consisted of tenor sax, trombone, electric guitar, conga, bass, drums. I don't think he plays with the caliber of musicians he had in the past, and the compositions he performed were not like the classic swinging bop tunes that he did in the peak of his career. The music was heavily African and rhythmically based. The tunes and solos were long, often repetitive ostinatos that went on and on. However, when Sonny took center stage to take his solos, he always brought the music to life, and blew that sax like he was in his twenties.
It was a great day, and one that I hope to repeat many times in the years to come. My photo gallery of the Newport Jazz Fest is here. (note: if you have additional pictures of the 2008 Newport Jazz Festival, I invite you to upload your photos to the gallery.)
¶ 8:30 AM 3 Comments Links to this post
Thoughts that flow through an ethernet cable connecting my brain to the World Wide Web.


My other webpages & social networks